A NEW LEVEL OF PERFORMANCE FOR CAMERAS AND CAMCORDERS
The SanDisk Extreme PRO® CFast™ 2.0 memory card delivers the high performance that broadcast, cinema, and photography professionals demand today. The card features a Video Performance Guarantee of 130MB/s (VPG 130) which enables cinema-quality 4K video recording (4096x2160p). And its write speeds of up to 450MB/s and data transfer speeds of up to 525MB/s provide extreme workflow efficiency. Our second generation CFast card, the SanDisk Extreme PRO CFast 2.0 memory card was designed in collaboration with leading-edge camera manufacturers to assure an exceptional user experience from the first shot.

DESIGNED FOR PROFESSIONAL VIDEOGRAPHERS
Professional videographers trust SanDisk CFast™ cards to keep up with the high demands of the of the cinema, broadcast and media industries. Get the most out of your professional camera with the high performance, capacity, and reliability of a SanDisk card.

EXTREME SPEEDS OF UP TO 525MB/S READ AND 450MB/S WRITE
With write speeds of up to 450MB/s, the card lets you capture multiple frames per second, making it an ideal choice for fast-action or continuous burst mode photography. The card offers read speeds of up to 525MB/s so you can transfer large files from the card to your computer lightning fast.

LIFETIME LIMITED WARRANTY
Our CFast cards are built for reliability. SanDisk Extreme PRO CFast cards come with a lifetime limited warranty, so you can trust your card to perform shot after shot. 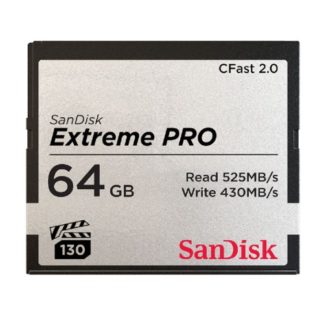