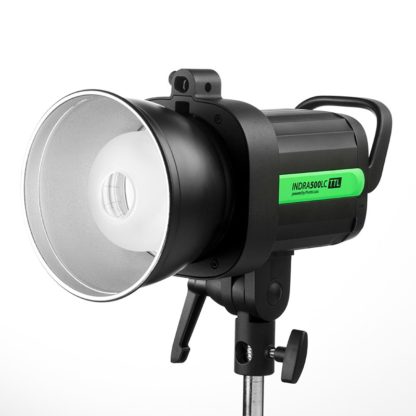 Phottix presents the first studio light system compatible with Canon’s radio flash system. The Indra TTL was the next generation of Phottix’s innovative TTL products–the Indra500LC takes that one step further – incorporating the radio control and triggering the Canon RT and the Phottix Laso triggering systems. The Indra500LC gives photographers 500W/s of TTL power, opening up new possibilities and allowing photographers to shoot in shutter and aperture priority modes with incredible power.

With the Phottix Indra500LC TTL’s High Speed Sync function photographers can shoot at higher sync speeds* allowing wider apertures while still being able to control ambient light. In manual mode the Indra500LC offers 8 stops of power adjustments – from full power to 1/128 in 1/3rd stop increments. With Stroboscopic Mode, the Phottix Indra can be used for special effect and creative shooting with flash frequency of 1-100HZ and flash counts of 1-100 times.

The Phottix Indra500LC TTL has the power and control of the Canon RT and Phottix Laso triggering systems built-in. Switchbetween TTL and Manual modes, adjust EV and manual power levels and use high speed sync, all from the Canon ST-E3, compatible Canon RT Speedlites and the Phottix Laso Transmitter – no extra hardware is needed

One of the best things of the Phottix Laso Triggering system is it’s ability to incorporate older non-radio Canon flashes into your workflow. There’s no need to set aside your 580 EXII – add a Phottix Laso Receiver and have the ability to control and trigger it, and add it your other Canon RT-enabled flashes – and the Phottix Indra500 LC.

The Indra500 LC comes with a Li-Ion battery, cables, charger, carrying bag and a new, smaller 5” reflector to make the Indra500 LC easier to pack and take on location.

Phottix Laso System launched a year ago to much industry buzz and acclaim. It provided something sorely lacking in the Canon RT flash system – backwards compatibility with legacy non-RT-flashes.

INDRA500LC – THE POWER-UP FOR YOUR LIGHTING! 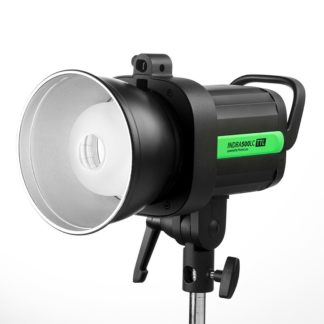